When Building Trades teacher Matt Anastasi was looking to make some room in his classroom at the Orleans Career and Technical Education Center, he decided to auction off some of the structures his students have made over the past few years.  One of the items was a small cabin that had a bathroom, living area with sink and a small bedroom.

For Laszlo Vajtay and his wife, it was exactly what they were looking for.  The Vajtays own and operate Plattekill Mountain Ski Resort in the Catskills.  They thought the cabin would be perfect as an office space for the resort.   “In response to the pandemic this year, we added a drive-through ticket window using a Conex style sea-container,” explains Mr. Vajtay.  “It was very successful and very well received by all the skiers and snowboarders.  We had outgrown our lodge and decided to convert our offices to add space to the rental shop.  When we saw the building come available we saw it as a cost-effective solution to make temporary office space.  The structure looks better than an industrial office trailer usually found on construction sites.”

Mr. Anastasi says Mr. Vajtay was blown away by how well the cabin was built.  “He said that he wishes the BOCES near them offered Building Trades, because he could see a lot of possibilities for his business.  He is even thinking of buying our tiny house to use as waffle stand at the resort.”   Mr. Vajtay also approached Mr. Anastasi about the class making another structure to use for their ski patrol.  “I think that would be a great project for the class,” says Anastasi.  “It also brings back fond memories when I was a ski instructor in Fredonia during college.  Mr. Vajtay even offered the students free passes this winter to the resort.  I think it will be very exciting for them to see something they built being put to use.”

The day that Mr. Vajtay came to pick up the cabin was a great lesson for the students as well when they saw what was involved in moving a structure.  “I reached out to friends in the industrial world around us to find a transporter and appropriate lifts on either end to lift it up and place it on and off the transporter’s trailer,” explains Mr. Vajtay.  “I also have to give thanks to Gary Roberts of the nearby apple orchard in Medina, who graciously lent a hand with his forklift to move the cabin.  The entire project was managed from 250 miles away and it came together like butter on toast.  Mr. Anastasi and Orleans/Niagara BOCES were extremely helpful preparing everything and we are thrilled to be working with BOCES and having the satisfaction of knowing this building was built by students in the Building Trades program.” 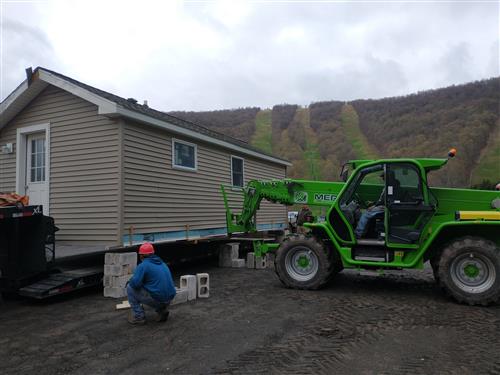 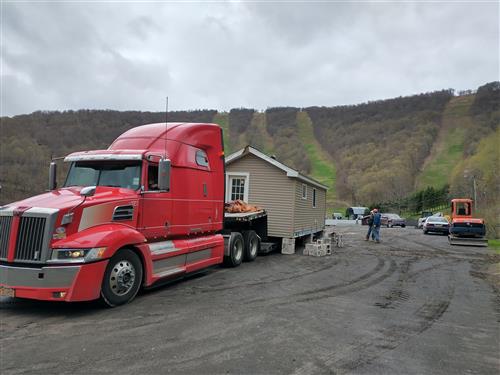