Anyone who was at a certain age can tell you where they were on 9/11/2001.  Orleans Career and Technical Education Center Security and Law Enforcement teacher Dudley Gilbert was a New York State Trooper at Post 31 (Lower Niagara Region).  “I was in Starbucks getting a drink and I saw the TV reports of the first plane crashing into the World Trade Center,” he recalls.  When he stopped at the Thruway toll and went into the employee lounge he saw the live footage of the second plane hitting.  “I knew in my mind that I would be sent to New York City that night.  I was a 14 year veteran and I volunteered to go.  I was told to pack enough clothes for 10 days.”

Gilbert and his partner Nick Johnson, with the rest of the Troopers, were briefed at Griffiss Air Force Base in Rome, New York and then were dispatched to the city where they arrived in the early evening.  “I will never forget it,” he says.  “It was awful.  It smelled like fuel, very acrid, and there were papers floating around and clouds of debris everywhere.  It looked like it was snowing.  It was surreal.  A memory that really sticks out in my mind, was walking with a Port Authority officer at the site and he reached down in the debris and pulled another Port Authority officer’s hat out of the debris.  You knew that he knew who it belonged to and it was just so heartbreaking.”

The Troopers were sent to direct traffic over several days and sift through the debris for wallets, ID, jewelry and body parts, anything that would help to identify the victims.  “When we came upon the remains of a law enforcement officer, firefighter or EMT, we all stopped what we were doing and saluted as they carried them off. It was brutal.  We were working 12 hour days and had to get decontaminated along with our vehicles before we left for our hotels at the end of the day.”  Other duties were escorting Wall Street executives back into the financial district because there was a fear that there would be financial terrorism.  “We had to warn them that once they got off the shuttle that we could not protect them.  It was very frightening for them as you can imagine.”

The Troopers were rotated out every seven days and Gilbert’s team were the first ones in and the last ones to leave.  “I cycled six times.  My last rotation was in April of 2002.  I think that despite the horror of that day and the aftermath, what really sticks out is how kind and supportive the city was to us.  They really rolled out the red carpet.  Celebrity chefs like Wolfgang Puck and Paul Prudhomme made us meals, the Red Cross had chiropractors help to adjust us after working those long days.  Celebrities were stopping us and thanking us for what we were doing.  One of the most touching things was driving down the Westside Highway and having throngs of people holding up signs that read “thank you” and clapping for us.  It was very moving.”

Gilbert shares his stories with his class every year and shows them the photos that he took.  “I know the students I have had throughout the years were babies or not even alive when this happened.  But it is so important to share what happened that day and honor all those who responded.  It is something that should never be forgotten.” 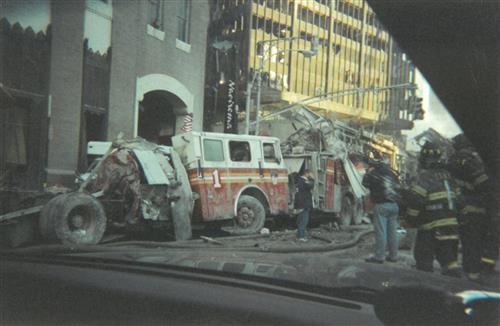